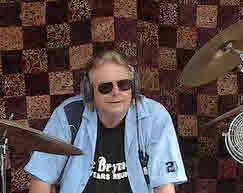 Dick is a musician and D.J. who toured nationally with a 60’s group called The Brymers.

The group is mainly known for their 60’s hits of “Sacrifice” and “I Want To Tell You.” The Brymers still perform and attempt to release an album per year. To date, the group has released five albums
1) Sacrifice
2) 40 Year Brotherhood
3) Where Are They Now
4) Never To Old to R-N-R
5) The Love From Our Soul.

During the last four years many of The Brymers tracks have appeared in movies (i.e. JOBS, Chillerama, Alex of Venice, and TV shows). In 1968 Dick recorded a psychedelic album with a group called Fapardokly (Merrell Fankhauser). One of the tracks was picked up by Warner Brothers and placed on a compilation album a few years years ago (Where the Action Is – 1965 1968 – Los Angeles). The comp album was nominated for a Grammy the year of its release. In addition to recording with The Brymers, Dick continues to record with other rock groups and hosts his weekly radio show called “Dick Lee and 60’s Garage Rock from California.”