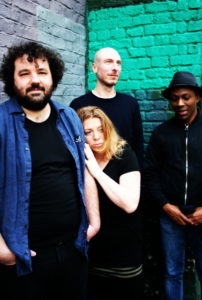 Curious Hour were formed in London by Emily Hanna and Andy Grazebrook in 2014. Influenced by blues, fuzzy rock, punk and soul, they soon began writing songs together. Not long after this, they met Drummer Wal Srankiewitz, whose versatile style and absolute joy of playing helped to drive the songs and add rhythmic complexity. The addition of Aaron “Bison” Lafayette on bass brings another finely tuned musical understanding to the group and completes the sound