Yur Mum is a two-piece rock band based in London, UK. Formed by vocalist and bassist Anelise Kunz and drummer Fabio Couto.

The band’s debut album, ‘ROAD RAGE’, was released by Flicknife Records In the Spring of 2018, followed by an extensive international tour including the UK, USA, Brazil, Ireland, France, Belgium, Austria, Hungary and Czechia. 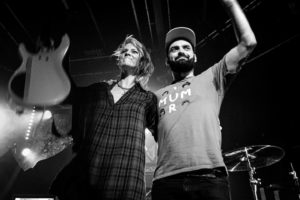 In 2019, Yur Mum self released the EP ‘Ellipsis’, which includes the single ‘SWEATSHOP’, featured by Tom Robinson on BBC 6 Music.