Bad Actress began forming in 2016 when guitarists, Struan McFarlane (then 15) of Forres and Thomas Bell (19) from Muir of Ord, decided to start a new venture. The pair had played together when Struan filled in on drums for the final gig by Far From Devils, Thomas’s previous band. They recruited former FFD bassist, Fearghas Lyall (then 17) and asked Struan’s younger brother, Lewis, to fill in on drums until they could find a full timer. 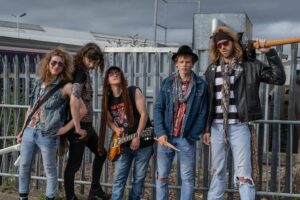 Lewis, then just 12, had been gigging for over two years with Struan and their older brother Ross, as hard-core power trio, Civil Punk. He set the bar high and was soon confirmed as the full-time drummer. They then focused on finding a vocalist, which led to Ross (then 17) being brought in to complete the line-up.