A tiny fixture in the Philly indie scene with Big Tusk from 2012 to 2014, David took a hiatus from recording music to organize with Philly Socialists, where he helped start the Philly Tenants Union and Philly Workers for Dignity. In 2017 he released “Into the Night (2017 Version)” and promoted it with a brief tour with a super-group of Philadelphia musicians. Aside from this, the only place you could catch David performing music for years was the historic St. Clement’s Church on any given Sunday, where as a professional chorister he would sing ancient hymns and intricate choral Masses to a “small but spirited” group of parishioners. But once COVID-19 hit and David was confined to his bedroom, he began feverishly finishing music while not at his labor bureaucrat day job. 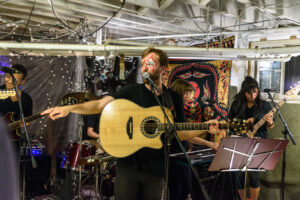 All five songs on “the wall” invite repeat listening, beginning with Thompson’s darkly driving and danceable paean to free-time, “time” (“time for the full development of the individual,” idle time, time for social activity, time for higher pursuits, for discipline, experimental practice, materially creative science, for hanging out and playing). Recorded prior to the advent of COVID-19, “time” usefully documents the perspective of what for many people is a bygone era, but it takes on new meaning in an age of quasi-quarantine, insanity inducing remote work for some, longer hours delivering or stocking or selling or caretaking for others.