Gary John Taylor says it like it is, in a way you’ve never heard it before. His honest, heart-warming songs will help you see life in a new light. Combining heartfelt lyrics with life experiences and stories. Hard working dad & husband from a dull wet market town in the north west of England. He grew up in Whittle-le-woods in Chorley in council house with mum, dad, sister and brother. You wouldn’t believe he is 34 years old, but his two young kids keep him on his toes. He has spent half of his life as a mechanical engineer (yawn!) whatever that is? He joined his first band when he was 19, who according to Gary, were a terrible punk band “but it was the start of what makes me who I am today” he says thoughtfully, like he has stumbled on to his next killer lyric. He moved on to join New York Tourists in April 2009, where he wrote and sang all of the songs. 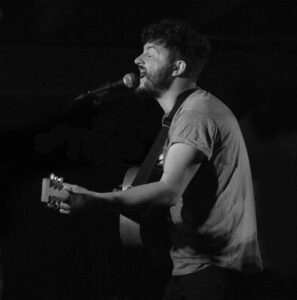 He has supported the likes of Status Quo, Kaiser chiefs and the Buzzcocks, to name just a few. Francis Rossi of Status Quo once told Gary, he thought he was the best songwriter he’d heard in a long time. So, what brought Gary to release a solo EP? “When I left New York Tourists to concentrate on my family, I lost myself and felt like I didn’t really know who I was anymore. I felt like I had lost my identity, as it had been thrown into the band 100%. After some reflection I wrote Rhino Skin, which is a song about having to have thick skin, dealing with people around you who seem to be friends, but at the same time aren’t. Dealing with people around you that aren’t coping very well. It’s a song about putting your arm around the people that need it, even though you are going through your own problems. Now I feel like I’ve finally found my thing, I feel at home with music for the first time in years.”