A little about the band. Barry Benedetta was the guitarist for “Cinderella” back in the 80’s. Years later he released a Christian album. Then he met another person and decided to do another album. Barry then put out a call for a singer on Linked in… This is where he met Shimmer. Barry and Shimmer wrote the “SHADOWS” album in 60 days. They flow so well that the music is just amazing! 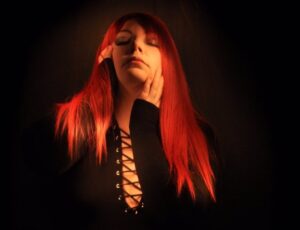 Shimmer Johnson was born and raised in Canada and is well-known for her haunting melody lines, honest lyrics, and touching songs, connecting with her audience in a way that leaves them with her songs on ‘repeat’. Shimmer adds her own piano to the music, as well as sings and produces all her own material, collaborating with people all over the world, such as Steve McClintock (“All This Time” for 80’s pop star “Tiffany”), and Kevin Fisher, well known for his work with “Rascall Flatts” and even Michael Jay (“Toy Soldier” for 80’s pop star Martika). Writing songs for multiple genres, ranging from pop, contemporary, and rock, Shimmer