Knoxville, Tennessee native Keen Garrity is a songwriter/producer with deep country music roots making storybook pop-rock. Although Garrity (Rebekah Burchfield) spent the late aughties fronting an indie progressive rock band called Wards of the Mayor, this is her first recorded album and her first foray into the territory of country music. 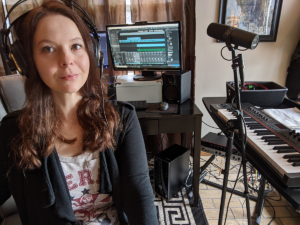 But, Americana runs in her blood: Her grandfather and great uncle recorded two singles for Capitol Americana as guitar/fiddle duo The Burchfield Brothers. Her father, Tommy Burchfield, played fiddle as a child and young man on various radio and television programs in Knoxville – and, according to family stories, was invited to Archie Campbell’s house and even got to careen around the property in Campbell’s golf cart. Many of her uncles and cousins are musicians, including her guitar-slinging cousin Adam Burchfield, who has played for 20 years in Texas rockabilly outfit the Octanes.