The name Lost American suits Kelley well because he has been living out of the US for almost twenty years, trying to understand his homeland from abroad (and chasing handsome strangers). His wanderlust begin in earnest after the 9/11 attack on New York City: he was flying to Novosibirsk, Russia when the twin towers were felled. He soon decided he wanted to immerse himself in a life outside the United States to try to understand the often divergent opinions of his home country. Falling in love with a Bulgarian rascal sealed the deal. 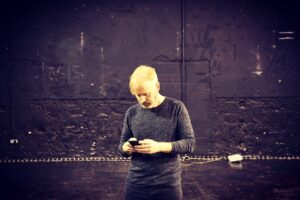 Kelley kept writing and recording in his ersatz lodgings during his years living in Bulgaria and South Africa in the noughties. By 2015, he and his husband were able to settle in Spain whereupon he started Lost American, playing venues in Barcelona. At this point, he was able to reflect on his experiences, recorded a bunch of songs, and released the first Lost American record in 2016.