Since their conception in 2017, the band have developed a wild form of experimental rock using balkan rhythms mixed with heavy psychedelic post-punk, wonky riffs and moments of haunting grace. All of this is delivered with a subversive approach to song writing at its heart; and this album is no different.

Whilst Maladyne Cave was very much an internal analysis, Faulty At Source has been a much more collaborative process, consciously focussing on issues in the outside world and finding points of empathy with other people’s stories. 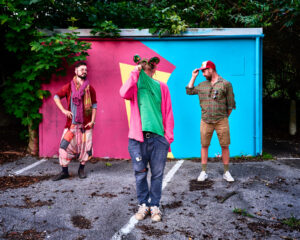 Recorded with Jake Bright at Bristol’s Christchurch Studios (known for sessions with Van Morrison, PJ Harvey, Butch Vig and Massive Attack), and mastered at Invada Studios with James Trevascus, Faulty At Source takes a full throttle look at the current political and social climate in the UK. The songwriting expresses disillusionment with capitalism, climate denial and the UK’s inability to take responsibility for its colonial past. The album also touches on the topics of polyamory and the burden of toxic masculinity.