The heavy, hard hitting sounds of My Kind Of Chaos are 5 guys from different backgrounds but forging a sound all their own. Listening to their music you will be teleported back to the amazing times of heavy rock in the 90’s but also feel the drive and originality of modern post punk/rock music that has been missing from our headphones and speakers for far too long.

Nic Griffiths – MKOC’s front man, song writer and producer, is from the 90’s Geelong punk scene. A former drummer, he laid down his sticks and picked up a mic to form the band MKOC in Queensland in early 2016. Due to COVID they were forced to dismember. Undeterred, he searched for and found the incredible new lineup, that is the new My Kind of Chaos. 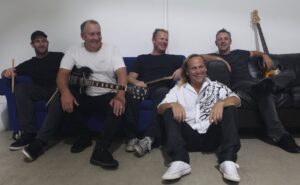 Jason Job on lead guitar hales from Kalgoorlie in Western Australia. Gigging from WA to Sydney, from rough country pubs to live theatre. Jas is an amazingly gifted lead guitarist. With an extremely diverse rock background, Jas brings so much musical energy to the sounds of MKOC that is embedded in every performance.

Szilard (Koko) Ernyes is a hard hitting drummer who originates from Hungary. With an incredible punk drumming style, that suits MKOC to a tee. Koko has 20 years experience and over 800 gigs around the world. He also played in bands such as BRIDGE to SOLACE, Superbutt, BWFA and Lagerstein. 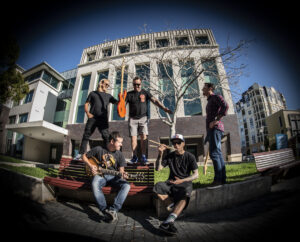 good reason. He started playing bass at 15 and has been playing in punk bands his whole life. He is an extremely accomplished bass player who forged a friendship with Koko in a previous band. It was   this friendship that got him the gig with MKOC

Mitch Lawson on rhythm guitar is a multi-instrumentalist a rising from the sweat-fed, garage-rock sheds of North Queensland. First learning music from the age of 4, and playing in bands before he could hold a beer in the pubs he played. Mitch’s rhythmic background brings so much colour to MKOC giving the band more versatility when writing new music but keeping the heavy sound they are known for.