Sunday Hats is an unusual name for a rock band but, the vocal melodies and the atmosphere the guitar and keyboards give to their songs, it makes them so easy listening like it was Sunday morning.

It all begun in Thessaloniki, Greece when the singer – songwriter Fotis “Sheriff” Toumanides decided to rename the band he was in, as soon as the guitarist and keyboardist left. They already had played numerous live shows in some cities, and wrote the music for two short films “Prince of the hill” and “The champions”. Mary Sypoula on keys, Jim Mihos on guitar and Panos Sahinides on drums are the current members of the band.

Their first album was released in 2016. Some of the songs were composed a few years back but they were never recorded, so when they wrote “The songs of yesterday” it was obvious that it was going to be the title track. The songs varies from hard rock to alternative and pop – rock 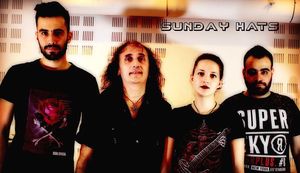