The Delerium Trees are Drew Jarvie, founding member, songwriter, vocalist and multi-instrumentalist, and Steve Barker, guitarist/producer. Their debut album, Paradise Will Be, explores the themes of hope, despair, loneliness, dreams, religion and politics. Drew formed the Trees after Perfect Stranger split up in 2001. He has created a unique soundscape based on his brass band and classical training, combined with various rock styles from his musical travels. Through the years, he has appeared with Nazareth, Huw Lloyd-Langton (Hawkwind), Then Jerico, Man and most recently Gavin Sutherland, providing the brass on several albums. Steve has mainly played for local bands in the North East of Scotland. The Delerium Trees is his first step into the world of original music.

Their new album #SwimmingWithTheGhostAngels is released 30/9/2019 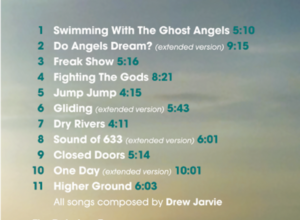