Formed in the capital in 2017 and hailing from three corners of Europe and the Middle East, this group of young provocateurs have come together with an elegant and sophisticated dirty rock and roll. Here is where furious indie rock meets catchy power pop. The Gulps are definitely here to make trouble. 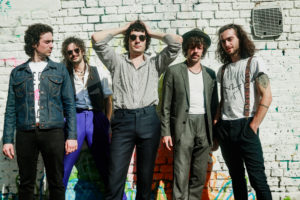 With a growing underground fanbase, the five-piece are reviving the original roots of rock and roll, with a unique take on classic alternative pop, fuelled by a Mediterranean ferocity that creates an audible experience so powerful that it rouses a strong emotional response from their fans, resulting in the only physical manifestation worthy of such a reaction in moments of bamboozlement and disbelief -a gulp!

In 2019, an incredible year for the quintet, they released ‘In The Kings House’ produced by The Verve’s Urban Hymns and award-winning producer Martin ‘Youth’ Glover (The Cult, The Charlatans, Dido, Erasure) through his label Youth Sounds. This first EP got glowing reviews and the band brought their vibrant live energy to European festivals including Mad Cool in Madrid, Truck and Camden Rocks in the UK. In October, The Gulps spent two weeks at Youth home-studio in Granada, Spain recording what will be their first album to be released in 2020. While in Spain, the band also played at Space Mountain Festival

« Ben Wood and The Bad Ideas » The Metal Byrds