The Incurables are a three-piece harmonic, upbeat, guitar driven garage rock band widely known for their high energy live performances and audience participation. Based out of Wayne Michigan, the band’s influences come from groups out of the sixties British Invasion/ psychedelic era as well as from New York’s “CBGB” sound from the late 70’s early 80’s. The bands style continues to evolve with a mix of the heavier rock sounds coming out of Detroit and the college indie sounds of Ann Arbor. 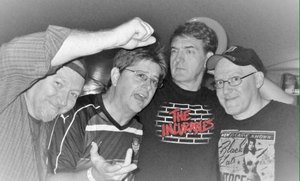 The Incurables have found much success sharing the stage with such bands as Billy Idol, Blues Traveler, Steppenwolf, Poison, Alice Cooper, Vince Neil, Detroit locals Bitter Sweet Ally, Adrenalin, Toby Redd, and have completed several tours of Germany and The Netherlands. Since their first performance the guys have hit the stage running, and continue to do so with their latest album titled “I Don’t Feel So Well.” The album includes the critically acclaimed single “Detroit Steel” having been featured on the Rodney Bingenheimer show on Little Steven’s Underground Garage, and the single “Down” featured on the Lord Litter Radio Show. If you catch them live or hear them on the radio you can’t help but enjoy yourself. Their energy is infectious and clearly incurable.