The Slow Day, a three-piece Manchester-based indie rock band inspired by artists like Gary Clark Jr, The Black Keys and British Britpop from the 90s, released their second single “I Can’t Sleep” on the 20th January 2020. The track, described as being about the “torture of a restless mind, in a social media world, following a bitter relationship break-up”, was recorded late last year at The Mill Rooms Studios. 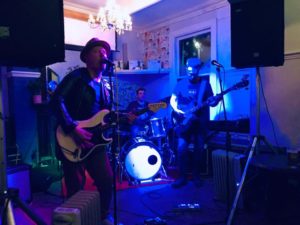 “Incredibly visceral amplified emotion – ridiculously accessible. It’s raunchy, smoky, and psychedelic. And it’s a sublime feat of Americana-inspired Alt Rock; a gorgeous mass of reminiscences of bands such as The Black Keys with much heavier, grinding instrumental friction offered by the likes of Mudhoney and Velvet Revolver. Their artist title is criminally deceptive.” A&R Factory

« The Metal Byrds » The Voice Tree