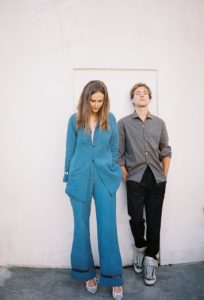 The Voice Tree was founded by partners Whitney Di Stefano and Logan Hugueny-Clark.  Hailing from Paris via Milan and Los Angeles, the indie rock duo fuses 90s rock-influenced melodies with synth pop expressions. They released their self-titled EP in 2017, followed by the singles “Isolationism”, “Byron Bird” and “Ghost Tree” released between 2018 and 2019.