Since 2007, creating good music. Vanilla Base restart again this year to play their best songs and return to the stages. Julie ,Quique, Luis, Jesus, and Manolo form this pop rock band, willing to captivate the audience with a fusion of their different styles and their musical influences. Rhythms for dancing, lyrics to listen and a lot of energy, all this with a vanilla touch… 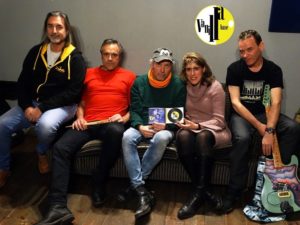 It was the end of summer 2007 when after many years together, the members of the group decided to regroup and begin to work after a break. A new vocalist and bass guitarist joined the already consolidated group which chose to recuperate some of their previous songs and leave out others, in addition to changing their name. With the incorporation of the new vocalist singer seven new songs were developed with a completely different focus and direction, giving rise to the name “Vanilla Base” with a new colour and flavour for a new journey. As the bass guitarist joined, several live performances were organized by the group including their appearance on a television show. The group then also recorded a demo CD with four songs. Its members have plenty of new ideas and plans for the future