Jackson Price and the Blues Rockets 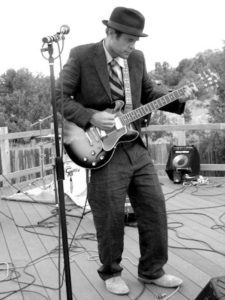 New Mexico-based blues rock and roll quartet Jackson Price and the Blues Rockets … Jackson Price was an actor in Los Angeles for 15 years doing guest spots on TV shows, supporting roles in movies, and acting in over 30 national computers. Learning blues guitar in his youth Price started writing his own material as he got burned out as an actor. He became the lead guitar player for a Los Angeles based blues band called the Mighty Mojo Prophets. He decided to move to Taos New Mexico to get out of Los Angeles where he created his own band called Big Swing Theory. The band was well received in Northern New mexico and inspired Jackson to create a second band to play more of his original Blues. Jackson Price and the Blues Rockets have just released their debut album “I used to have fun” featuring all original compositions by Price .