28 Double are a 5 piece, high-energy Hard Rock/Groove/Metal band from Derby. Taking influences from bands such as Alter Bridge, Down, Black Stone Cherry and Clutch (to name a few), the Double bring together groove, catchy melodies, intoxicating solos and driving heavy riffs bundled in a fresh modern package! 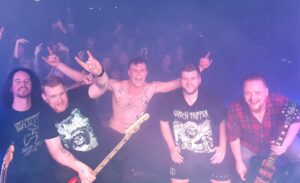 After the release, Nick made the switch to vocals which brought a new sound and higher energy into the band, leaving room to introduce Kieran Agnew (Bass 2015-2017, Guitar 2018+) into the 28 Double family after being in a previous band with Nick and Rob!