Formed in 2014 by current guitarist Ben and drummer Grant, Concrete Kingdoms are a hard rock/alternative rock band from Dunfermline in Scotland’s Central Belt. The band experienced a few line-up changes before settling on the current line-up to include bassist Doug and the two Marks, filling recently vacant vocal and guitar positions. Since then the band have played their music up and down the UK, ranging from support slots to headline 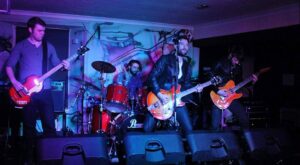