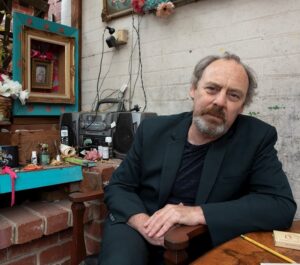 Originally from Australia and resident of the Netherlands since 1993, Dan started out with an Ecology degree from the University of Tasmania before his music career got going. In Tasmania and later in Melbourne in the 1980s, he was a founding member of popular psychedelic/folk cult group Wild Pumpkins at Midnight. Later he would become the driving force behind the eclectic rootsy trio Big Low (2002 – 2012) as well as being a founding member of one of the Netherlands most unique world music groups Parne Gadje, a producer of documentary music, a storyteller and owner of quality independent label Smoked Recordings.