Danny is recognized worldwide for his melodic, powerful & emotional vocals, and is widely acknowledged as one of the best voices in the business. On the rock scene, he is known for his involvement with British hard rockers Waysted (1985-1987) and is — justifiably — famous for his flourishing voice-work with melodic rockers Tyketto. Danny left Tyketto and the band split afterward, in 1996 (though they would reform with the full original line-up in 2004). 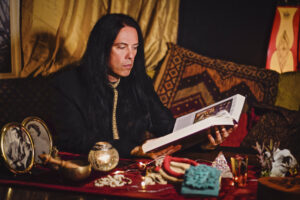 Danny went on to release two studio albums as Vaughn, then a third solo album, entitled Traveller, released under his own name in 2007.
Danny found success with other projects too, such as From The Inside [melodic rock] and Flesh and Blood [Southern rock]. He also co-founded The Ultimate Eagles [2009], which has been described as “The best Eagles show in the world.”

Now, this talented vocalist and experienced multi-instrumentalist is about to launch his latest solo album, entitled Myths, Legends & Lies: a project that he’s worked towards for many years. “It’s an album I’ve been talking about makingor over fourteen years,” Danny explains, “A bunch of songs I call my orphans: they’re a groups, collected over decades, that I never found a proper home for.”

« The Sundogs » Smash Into Pieces