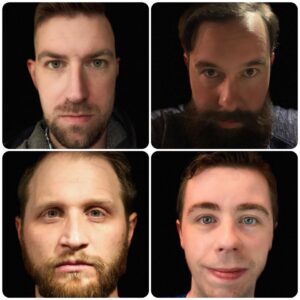 As these stories often go, E.R.I.E. was born out of tumult. In the midst of an unexpected, three day stint in the hospital in October of 2018, E.R.I.E. architect TJ Foster (Accents, Darling Valley) was asking a lot of cliché, existential questions. That kind of thing is to be expected when one’s heart stops for fifteen seconds on the bathroom floor in the middle of the night. Despite these mostly unanswered questions, a clear thought did emerge from the ashes: the desire to play music again. Loud music. The kind that begs for a live audience. Disillusionment had set in for Foster in regards to his primary songwriting vessel – his trusty Martin acoustic guitar – and after years of yearning for the ‘good ol’ days’ when amps were cranked and ears were aching, he decided there was no use in simply yearning anymore. He set his acoustic aside, polished off the electric and immediately began to write the forthcoming album Don’t Wanna Live, Don’t Wanna Die due out early 2020.