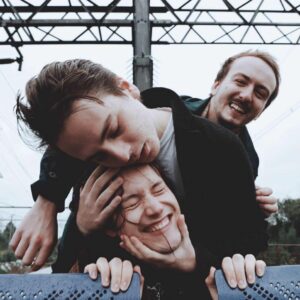 Tinfoils are a three-piece garage punk band based in Manchester, whose frenetic brand of ‘no frills’, DIY guitar-driven music rages against the private security companies who police the streets of Britain, the royalist media machine, and youth debt – as well as having the odd song about thrush. Since taking to the stage in early 2018 the band have headlined a number of sell-out hometown shows, as well as a string of gigs and festivals across the North of England and Scotland, with highlights including supporting bands such as The Blinders, SHEAFS, and The Mysterines, and checking off some of Manchester’s most prestigious live music venues.