Ryan’s deep love of dark classical music and hypnotic addiction to metal fused to form the sounds of Midwest Conspiracy in 2003-2004. 2007 Ryan formed Morbid Serenity and began storming the midwest. Over the next few years, acoustic solo releases appeared “Psilocybin”, “Who’s Your Gaddy?”, “Nail In The Coffin”. 2011 was the end of Morbid Serenity and a long hiatus from performing in public. Ryan moved to Idaho in Summer 2018. Melancholia Pines, a project of Ryan Gaddy and Jay Henjes released a psychedelic instrumental album. Gary West found this album link and contacted Ryan about playing guitar for a new band he was forming. This band was Farmacy

Gary West has played in various bands including his first band called Irving Blue. Gary’s favorite song is More Than a Feeling by Boston. 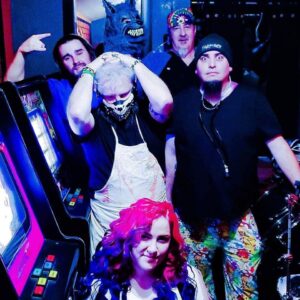 Selene Sol is the descendant of the sun goddesses and moon gods. Raised and trained amongst those of her kind and would later pass on to be glorious rulers of the planets. Only time will unfold all of Selene’s past and reveal the mysteries of what was and always will be the line of the sky goddesses.

Mickey West, one of two guitarists and son of Gary West, was destined to be a prodigy. Self taught, starting at the age of 10 with a first act acoustic guitar given to him by Gary. Mickey grew up seeing all the elements of live music, with all genres dating back centuries. During his childhood, he formed a band with some buddies named Sock of Fleagles and soon became Thicker Than Blood. After graduating high school and band separation, Mickey enlisted into the Marine Corps and served a full term of 8 years. After his military career he pursued music again leading him to Farmacy. His favorite song is Blood Red Skies by Judas Priest.

Jeffrey (Z) picked up a guitar while in his twenties and after many years switched his playing to bass. He has played locally in Nuke Venus, Rusted Hand, Dysfunktynal Kaos and Lust for Glory. Jeffrey has passed his musical genes to his Son and Daughter, both of which are drummers. Asked one day, what song was it that you heard that made you want to play music, his answer…Crosby, Stills and Nash – To the last whale: Critical Mass/To the wind on the Water.