Urban folk…is that a genre? Glenn’s live performances are ever changing, but universally powerful. The live experience has been the principal aspect of Glenn’s musical outlook with recordings acting as a snapshot of musical moments. And these recordings are all the stronger for it and what he does we find an honesty and passion that is all too rare. This isn’t music written for the A+R department, it’s relevant, resonant and dynamic, both musically and lyrically. 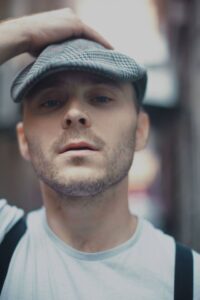 Glenn says of his musical self “I think of myself as a folk singer but many do not. Maybe alternative folk would better describe my bastardization of the genre? Reviewers have described my lyrics as thought-provoking and my musicianship energetic and I guess this song lives up to that.  I was apprehensive about releasing ‘As It Is’ as my next single as it might just hit too close to home with what is happening around the world right now. But, it’s is a song about unity, and as there isn’t much chance to play my new record on stage right now, so I wanted to give folks the chance to hear it.