Harness Flux is John Masters, who was born of the DC indie pop/rock scene in the 90’s when labels like Teenbeat and Simple Machines put to wax some of the town’s finest groups. From those influences John formerly fronted the band Metropolitan, who dabbled with the 00’s garage rock boom with Pavement tendencies and Sonic Youth propensities. His solo project Harness Flux is a cultivation of many years worth of indie rock /psychedelia/noise rock/no wave/lo-fi influences still ringing through John’s ears. 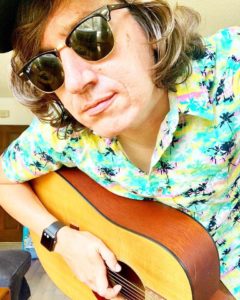 John has also appeared in such acts as Stamen and Pistils, The Cheniers, America Hearts and Jowe Head & the Fleeting Glimpses. Over the years John has shared stages with Spider Bags, Public Service Broadcasting, The Dismemberment Plan, The Brian Jonestown Massacre, Bardo Pond, Tristeza, Gogogo Airheart, Wolf Colonel, The Bravery, The Rosebuds, The Shout Out Louds, Bis and many more.