Inspired by all styles of music, their influences are drawn from across the spectrum: citing influences from classic bands as a core, and combining it with the contemporary stylings of modern day bands such as The Black Keys, PVRIS, No Doubt, The Pretty Reckless and Royal Blood. With such a broad palette to draw from, it’s immediately apparent that Karobela’s sound is one of a kind.

Karobela are a beacon for the stage – a flood light in the dark – bringing rock to the forefront of a pop heavy world and reminding you that the stadium filling rock bands of the past are still present today. From your first sight of tartan and leopard print, you can’t help but be drawn in by the band’s infectious character, immense stage presence and seductiveness. Karobela are putting their own very individual stamp on the world of alternative rock music, carving a path of their own and taking no prisoners along the way. 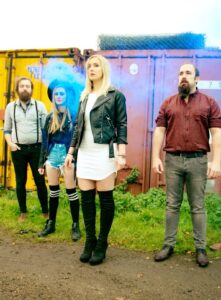