KISS THE GUN was born at Dave’s place in Salisbury in January 2016. Dave and Graham wrote a song called Tainted Heart and in a couple of hours had a demo that was uploaded to Soundcloud. That demo got heard by someone who owned a studio and label, who asked us to record an EP; the band was born and recorded at Smokehouse Studios in London on 22 and 23 April 2016. Abigail Austin was confirmed as our new singer in the summer of 2018 and the band’s long awaited second album, We See You, is due for release on 4th September 2020. 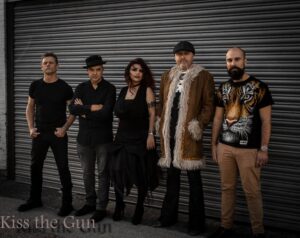