Lara Taubman grew up in southern Virginia, where the sounds of Old Time music were all around her. She began singing as a child but was seriously drawn to painting, and went to college to pursue a life in visual art.  She has spent a lifetime listening abundantly to all kinds of music, yet when Lara began to write her own songs those formative sounds of Old Time music are where her heart was led.

She went on to study Cultural Theory in graduate school and became a professional art critic and curator. Her work took her all over the world until she returned back to the city of her heart, New York City.

A few years ago, she was working on some fiction, it led her to hear a call while she was cleaning one day: “If you don’t have children, you will probably be OK with that, but if you don’t sing in a serious, committed way, you will regret it on your deathbed.” She listened to the call. It brought her through a very intense journey of healing from a lifetime of emotional pain and trauma. Through singing again and learning how to make music she was reborn into a world of hope and joy. 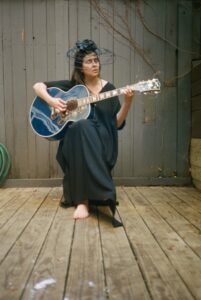 One soft fall day in September of 2018 she found herself on the porch of the Wolfe Island Records studio, the old converted post office on Wolfe Island, Canada. Her producer and founder of the label Wolfe Island Records, Hugh Christopher Brown had invited her to make an album. The rest is history, one that she never consciously designed.

Today, she owns a small farm on the island, with a massive old barn doubling as a music and performance space. It is not far from the Post Office and the community of musicians who have also moved there and who helped her to make her album. Wolfe Island has joined New York City in her heart, which she still calls home.

« The Pinx » Butterflies on Pins