Les Techno is a New York City based post-punk electronic rocker that has released critically acclaimed singles “Where were You?”, “Come Along”, “Closer Look” and “Guilty Pleasure” available on Spotify, iTunes and elsewhere.    He has While working on his “studio tan,” Les made hip-hop tracks with rap artists Run-DMC (Profile), Mobb Deep (Loud/RCA) and Onyx (Def Jam/Sony) (among others). He did a Red Hot Chili Peppers remix (Higher Ground), worked with R&B artist Ava Cherry and with the late, legendary funkmaster Bernie Worrell (Downtown, Virgin/EMI).  This project is a new mixture of rock guitar sounds, electronics, hip hop beats, and live bass. And his satirical lyrics delivered with a Morrison flavor. 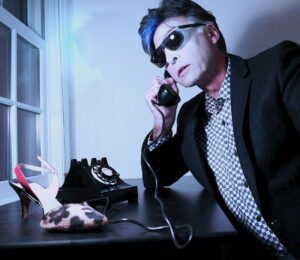