Anyone who knows the Scottish music scene will tell you that Mickey 9s is one of the most exciting bands to see live. The irreverent 4-piece from Glasgow combines elements of dance, punk and hip hop into a blistering, genre-defying groove that regularly sends crowds into a frenzy.

It all started when four young lads went to see Daft Punk at a music festival and subsequently decided that this was the kind of music they wanted to make. Upon returning home the boys ditched their guitars and bought cheap synthesizers – hoping to join the electronic renaissance that was happening in the UK at the time.

After countless nights of basslines, bleeps, buzzes and beats in the rehearsal studio and on the dancefloors of SubClub and the Soundhaus, it became all too clear to the band that their new idea wasn’t working. The electro songs they were writing lacked the energy, momentum and emotion that the 9s wanted to unleash upon the bars and venues of their home city. 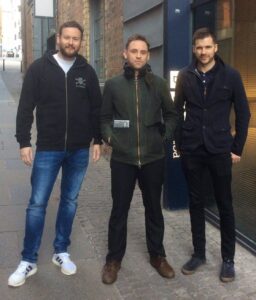 So, the question was thus: How do you combine the ‘perfection’ of dance music with the raw energy of a rock ‘n’ roll band? Fortunately for these lads the answer was simple. The guitars reappeared just as quickly as they had gone and the synths were sold on eBay.