A multi-talented one-man-band driven by his deep-seated love for Rock, Red Skies Mourning, alias of Chris, basks in the afterglow of creation, letting music take him down roads both familiar and unknown.

Hailing from Prince George’s County, Bowie, Maryland, Chris grew up on a musical diet that strictly revolved around Pop, Metal and Rock. This passion for the latter of the three genres is evident throughout his life, singing in cover bands that did the rounds of performing the anthems of iconic acts such as Queen, Alice in Chains and U2. Having also been in numerous Hardcore Bands (Carved In Stone, Erase The Past and Taken By Force), Red Skies Mourning has a host of older LP’s from these projects and has graced the stages both nationally and internationally, playing at CBGB (NYC), Nations (DC) and The Underworld (London). He also cites Nobuo Uematsu, Final Fantasy composer, as having a pivotal influence on his sound. 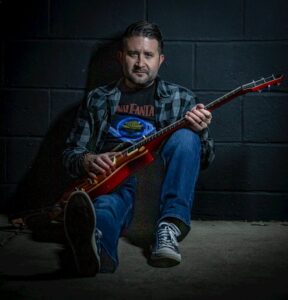 With an array of musical influences, his sound is fluid but is always linked to emotion. Showing these feelings off soulfully, his enchanting voice, paired with his songwriting brilliance is capable of pulling on the heartstrings of listeners from across the globe.