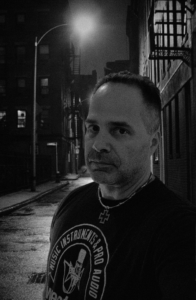 Growing up listening to KISS, and watching Saturday Morning Cartoons has a profound

effect on a little kid. From the Bubblegum sounds of the Bay City Rollers to the crunch of

AC/DC, one’s mind can be filled with loud guitars and cartoonish style rock and roll! Rob

took his favorite influences from the seventies, full steam ahead into the mid-eighties where

the LA Scene exploded and the mystique of the Headbanger’s Ball Generation, was

erupting! Barely out of high school, this small town kid took up the drums and tried to turn

a fun hobby into something more significant. But…the scene dwindles, times and music

change and some people just stumble in “too late,” to the party.